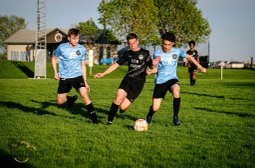 By Gabriel Almada
3 days ago
Share via
FacebookTwitter
https://www.berlinfa.com/news/

We had an interesting intra-club game at Lions Park on Thursday evening. We were expecting the temperature to play a role but it ended up being very pleasant by the time the ball began to roll.

The game was supposed to be Berlin Grey vs Berlin GT but at least during the first part, it looked more like both Berlin teams vs the field conditions. The grass was too long, and the field markings were barely visible so players from both sides had trouble moving the ball along. Luckily they were able to adapt by the time the first half ended, with GT dominating the actions but unable to crystallize their opportunities and take a lead.

Things changed soon after the game restarted, as Jackson Kruse scored with a beautiful shot from outside the 18 yards. If was an outstanding effort from GT's #15, that made the keeper's effort futile. After that goal, GT looked more composed and continued generating chance after chance but was still not able to finish them. Eventually, the away team found a second goal to put the game away (a fantastic through ball by Connor PInheiro and an equally amazing finish by Hassan Davut) but not before GT's goalkeeper Adriaan van Raaij had to pull an amazing looking save to keep his team's lead.

The final score reflected what was seen on the pitch (GT could have had an extra one); GT now shares the lead in the league along with Stratford, that beat FEDS United by a score of 4-2 in the other game of the day.

Jackson Kruse picked up the Player of the Game award and Adriaan van Raaij earned a shutout for GT.